As we a were leaving to our trip on the next day.  We spent a little more time with my sister and family before embarking to cities outside Taipei.

We went to Danshui as it was not far from Beitou.  Danshui is located at the last/first stop of Danshui Line (Red line).  We were out during the day time by taking the Metro train from Qilian to Danshui.  It was indeed an enjoyable outing for us and also for my nieces.  Danshui attraction and shopping are just located at the Metro station.

There are two stretch of road.  One is facing the sea where many game stalls were available.  My nieces love to play these.  Dart game.  Hitting the balloons are easy.

We did not hang out at the Danshui for long because it was a rainy shower in Taiwan.  Moreover, it was hard to shop in the rainy day and kids were tagging along.

We did shop a few things there.  I bought a Skecher shoes which was indeed cheap!  In Singapore, you could never find shoes selling range from S$50-80.  They do have varieties of design – Sports and casual.  Phone covers, phone plugs, cute hats, peanuts (famous), steel eggs, clothings are only some delicacy items in Danshui.

Is good to eat when the weather is cold. The restaurant is similar with Shabu Shabu in Singapore.

天汤 address and location of the restaurant:

Trying to get my blog organised.  Guess it’s better to separate my each day posting as if not it tend to be very long in my 2 weeks journey.  😉

Yeah… we did not go to many places on our third day in Taiwan because it was a Christmas Eve day.  We required to get back home by evening.

Maokong Gondola is located at the highlander of Taipei City.  It’s a quiet and relaxation attraction where numerous tea houses can be found there.  There are also restaurants available where sitting at the edge for lunch is indeed meaningful and peace while of course enjoying the view.  Click here if you need more information about Maokong Gondola.

We arrived at Metro Taipei Zoo around 12 noon.  A short 5-7 minutes walking distance to the cable car station known as Taipei Zoo Station.  Single journey ticket price is NT$50.  Easycard is accepted. We purchased at the ticket counter did not realise that Easy card is accepted until we had purchased them.  The journey was approximately 30 minutes to arrive the Maokong Station. 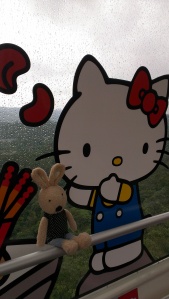 Get ready with your camera!

This is what you will see infront of Maokong Station

Once arrived we grabbed some food to eat.  Diagonal opposite the station, there were stalls selling some local food.  We took a break before adventuring the area.

We walked in to a few tea houses to check out the suitability.  We walked further along the road and there are more tea houses and restaurants. 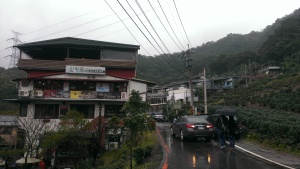 We chosen Maokong Teahouse as it looked cosy to us.  The teahouse also sells their own tea in metal containers and in packets. This is the one.. 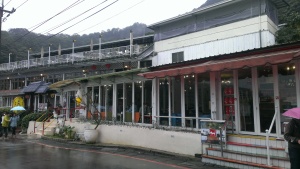 The prices of the tea sets ranges from NT$150 to NT$350 depending on the type of tea and some sets comes with cookies too.

It was pretty cool sitting here with the taiwanese locals enjoying a cuppa tea.  Tummy felt warm in the cold weather.

As said, Maokong Gondola is a place for peace, relaxation and quiet.  It is a recommended place to visit with friends and couples who enjoys quiet walk and drink in the afternoon… Not for family with kids.

Right after our visit, we race home as it was near to evening.  We spent roughly about 4 hours at Maokong Gondola.

As it was a Christmas Eve day, we decided to buy a cake for my sister and family who is celebrating the Christmas Day.  We went back to Taipei Main Station to search for cakes and found this shop tend to have a very long queue.  The shop is called Uncle Tetsu’s Cheese Cake where only limit 1 piece of cake of customers (if i’m not mistaken).  The cake looks ordinary cheese cake to us, but it do have the quality taste. It cost NT$199 per cake. 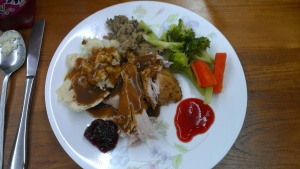 Although it was a simple meal but it was fun particularly spending time with my sister and family.  And who else eager to join us the celebration???…. He was watching us….. 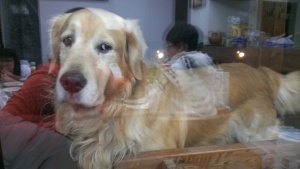 Well indeed Odie is an adorable dog but he is a crazy, never keep himself calm and really playful dog.  Sorry Odie, you are a ransacker dog,.. you got to stay away from entering the house.  Not to worry, Odie has personal heater, so that he is always keep himself warmed during the cold season.

Click here for our Day 4 travel fun in Taiwan… 😀

We travelled to Taiwan once before. That time was 2009 and Taipei city was the only place we visited. It has been 4 years since our first trip. We went to attractions Chiang Kai Shek Memorial Hall, National Palace Museum, Taipei 101, Taipei Zoo, Shilin Night Market, and Ximenting.  However, on this trip, we were looking forward to travel elsewhere instead of Taipei city alone.  Hope you able to get a few good tips from my journey!

The arrival of Taipei city We booked Cathay Pacific (CX) airlines 5 months before the departure from SIN-HKG-TPE due to promotion by the airline. Without hesitation, we booked  the tickets! However the only hassle for booking CX  was we required to transit for an hour or so in Hong Kong.  It was a large plane with seat configuration of 3-4-3.  In fact the plane was fairly new.

Cathay Pacific in the cabin

Accommodation for two weeks could actually cut our throats. Fortunately my sister is living and working in Taipei city itself.  Hence, I saved the cost for the accommodation only at Taipei city. 😀  When we arrived Taipei airport, it was in the evening around 6pm.  We were welcomed to Taipei home which was located at Wellington Heights.  The nearest Metro train station is Qilian.

Although the according to the Metro station, Qilian looks far from the city.  However, it was not far at all.  It only takes 25 minutes to arrive the Taipei Main Station byMetro train. On the arrival day, the weather was cooling.  The temperature was around 15-20 degree Celsius and sad to say, it was raining.

On our 2nd day of arrival, my brother-in-law gave us a first glimpse of their home’s nearby attractions.  The nearest attraction is Thermal Valley, its not for hot spring bathing but its a source of supply for Beitou Hot Spring.  It is a pond of hot spring with lots of steams surrounded with rocky paths.  Strong sulfuric smells.  Thermal Valley is located nearest station Xinbeitou which is also near the resorts for Beitou Hot Spring.  I’m not too sure if there are public buses travels to the Thermal Valley.  However, flagging a taxi to Thermal Valley is not expensive because it only takes about 5-8 minutes ride winding uphill road, roughly about 2-3 km from Xinbeitou station.

After the visit of the Thermal Valley, we were dropped at Xinbeitou Metro Station.  Certainly, make a purchase of Metro Easy Card (Easylink card in Singapore) prior taking Metro transport.  Easy card can be purchased at any Metro stations for adult  cost NT$500 (Value of the card NT$400 and NT$100 card deposit).  Metro Easy Card also available to purchase at convenience stores such as 7-ELEVEN, FamilyMart, Hi-Life and OK.  Purchase at the convenience store cost different from purchasing at the Metro train stations.  It cost NT$200 for purchase with the value of NT$100 and NT$100 card deposit. 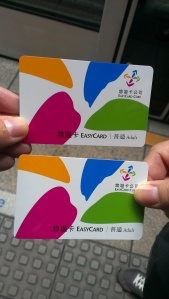 Our second visit was Taipei Main Station.  It is large station with the accessibility of TRA (Taiwan Railways Administration), THSR (Taiwan High Speed Rail) and Metro interchange. The station is busy with many exits and underground accessibility.  The directions  boards given were quite confusing.  It took three times for us to get familiar of walking the Taipei Main Station.  The station consists of many levels of undergrounds and two levels of buildings (If I was not wrong).  There are many bakery stalls and shops at the ground level.  Food section is at the 1st floor, a very large food court that served Western, Eastern and Local cuisines.  As we in Taiwan, certainly we try the Taiwanese local food. Yummm…. 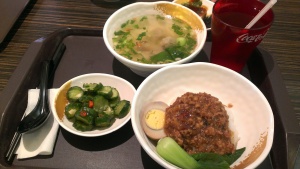 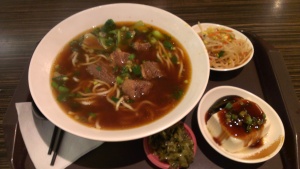 From the Taipei Main Station – we took a Metro train to the wholesale garment market in Taipei, place known as Wufenpu.  The nearest Metro station is Houshanpi.  About 7 minutes short walk to the wholesale market.  When we were there, it was drizzling.  Darn.  As you know, it’s winter season in Taiwan, hence most of the wholesale shops sells winter clothes.  We only gotten 2 pieces of clothes there.  We arranged to go to Wufenpu reason because we did not bring enough winter clothings.  The winter clothings cost NT$250-500 depending of the quality. Ensure bargain with sellers. 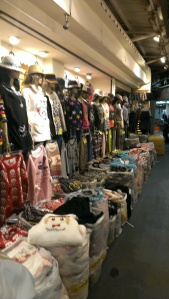 While shopping, we felt hungry.. We arrived at Formosa Chang (the logo is a bearded man) for light taiwanese meal.  Formosa Chang is a Taiwanese fast food restaurant that have many branches in various of outlets in Taiwan. 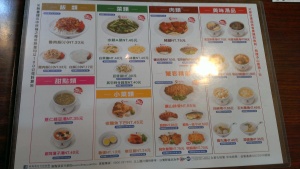 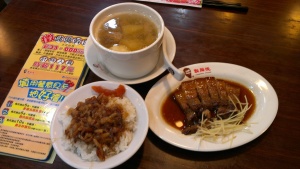 After eating and more shopping, we walk further to Raohe Night Market for dinner by by-passing Songshan Railway Station.  It took us about 10-13 minutes walk from Wufenpu.  Moreover it was raining… sigh.  It was cumbersome when holding umbrella and camera at the same time. When we arrived Raohe Night Market, 30% of the stalls were not opened due to the rain.  But we managed to eat some local food there and one of them was Taiwan Bak Kut Teh. Interesting… 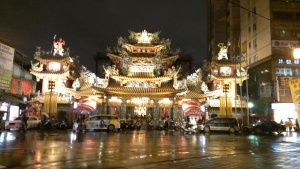 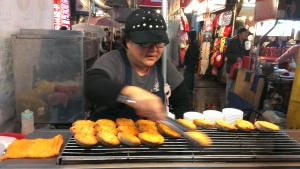 Some night snacks to bring back home – Osyter egg BBQ

Yeah… adding to that we tried out other food.  Bought back for somemore, the black pepper crabs and BBQ of Oyster egg. Raohe Night Market sells food more than clothings and accessories.  Maybe because of the raining thats why they were closed?  I guess the night market specialises food.